This is the first entry recounting our adventures and experiences traveling in Europe.

It began with a delay. This was, quite simply, like waiting months to open a present, holding it in your hands, and then being told you had to wait another day. On second thought, it wasn’t nearly so dramatic, but it felt that way to me. Dan, on the other hand, just settled in with a good book.

Our initial itinerary was to fly from SFO -> JFK -> DUB, leaving San Fransisco at 11am on Monday, arriving in Dublin at 9 am on Tuesday. Then we would grab a rental car, see The Book of Kells and Trinity College, St. Stephen’s Green and tour the Guinness Storehouse.

Due to a thunderstorm (really?!) over NY, our flight was delayed 2 hours out of San Fran, causing us to miss our connection to Dublin.

So… our new itinerary became: Chomp on bit (and other items of slightly more sustenance provided by a meal voucher) in SFO International Terminal until 7pm Monday evening. Fly direct to LHR (London), connect to DUB and arrive in Dublin around 6pm Tuesday evening.

The Good Wife kept me distracted, though I told myself that if there were going to be any travel hiccups over the course of the trip, may as well get them over with (as though it works that way).

So, instead of spending the day in Dublin on Tuesday, we drove straight to our accommodations for the night. 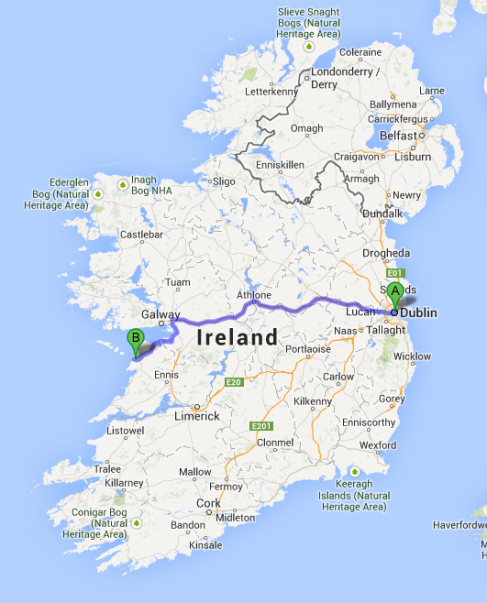 Straight across the country that is. That’s right. By this point we couldn’t help but simply be giddy that we had actually arrived, and the 10pm sunset provided a relatively well-lit journey for most of the way.

The Ballyvauhan is a winding coastal route that connects Gallway to the Cliffs of Moher and beyond. As Dan adjusted to driving on the “wrong side” of the road and car, I stared east into the Burren, bleak and rolling in the dimming sun; and west to the bay, where the sky and the water tossed back golden reflections.

Dan, in his navigational ferver, and me, with my eyes full of gold, stumbled in to our blessed resting place at quarter to eleven that night. The dear hostess of Dubhlinn House showed us our quarters, and – just before I collapsed on the bed in total exhaustion – mentioned that there would be live music at the pub up the road until midnight.

I looked at Dan. No, I thought. And then he had that gleam in his eye, and with a swipe of blush and scrub of the teeth, we were off.

No regrets. Only memories.