I found it humorous to realize in my travels abroad that many Europeans (perhaps subconsciously) imagine all of America to look like NYC and Laguna Beach. Yet most Americans have the same narrow understanding of California as beaches and movie stars. In my opinion, the best parts of CA are found miles from the coastline and even further from the endless summer of SoCal.

So when my dad came to visit in January, I couldn’t wait to show him that mid-winter displays some of California’s most gorgeous angles. I owe much of my love of the outdoors to my father. Thanks to him I grew up on mossy, tree-shaded trails leading deeper into the woods or on to the river or even to another world if my imagination was up to the task. Actually, I have him to thank for discovering the amazing site Walkifornia a few months before we moved. It was this site that turned me on to my two favorite (mostly unknown) parks in CA: Garrapata and Big Basin. My dad, being the tree-lover that he is, requested to see Coastal Redwoods and Sequoias on his trip. Luckily, both are just 3 hours away from our home in the Central Valley. 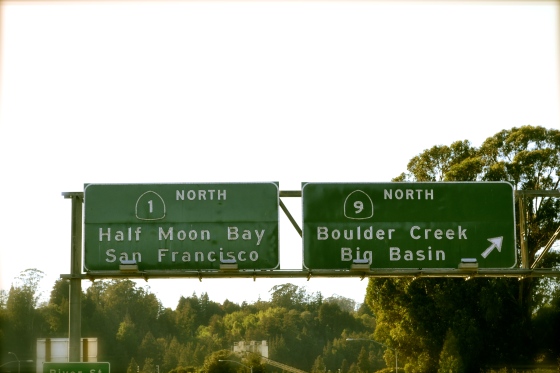 So we set off for Big Basin Redwoods State Park on Friday morning. Located amidst winding roads and hidden between Santa Cruz and San Jose, this park is quiet and majestic.

For our day trip, we opted for the shorter trails nearest the park office. The largest trees are within 1 mile of the parking lot, so it’s perfect for a shorter hike. The best views in the park are said to be at Berry Creek Falls, but we haven’t yet put that path to the test. 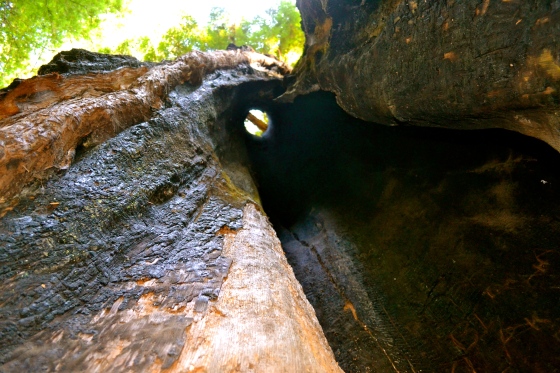 We’ve visited Big Basin from Fresno as an overnight and stayed in Santa Cruz, but this time we were day trippers. It’s impossible to be this close to the ocean and drive right back into the valley without saying hello, so we stopped into Santa Cruz for dinner.

Do you find yourself repeating the same trip instead of staking out new territory? I can’t help myself – the Lighthouse Beach in Santa Cruz is simply stunning, especially toward sundown.

Nearly every time my boots hit the trail, I find myself wishing my dad was out there with me. He would love this, I think. He would really just love it here. Finally, I had my chance and, as you can see, we were determined to make the most out of his visit. The next day, we were on to Yosemite (or as I dreamily refer to it: our backyard). 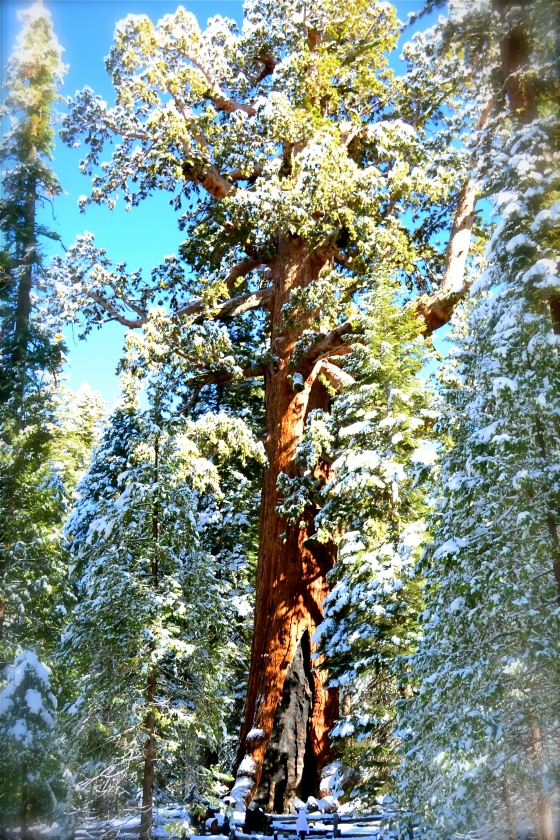 Trudging through the snow, we debated the merits of the Redwoods and Sequoias. It was love at first sight for both of us. The Sequoias had won my heart two years prior during my first visit to California. The Jurassic quality of the grove, the quiet magnitude… and this guy: The Grizzly Giant. Isn’t he magnificent? I stood under his triumphant branches and watched the dry snow crystals sail down like angel’s confetti. Sure, the Redwoods are fantastic, but he and I will have to agree to disagree on this topic. 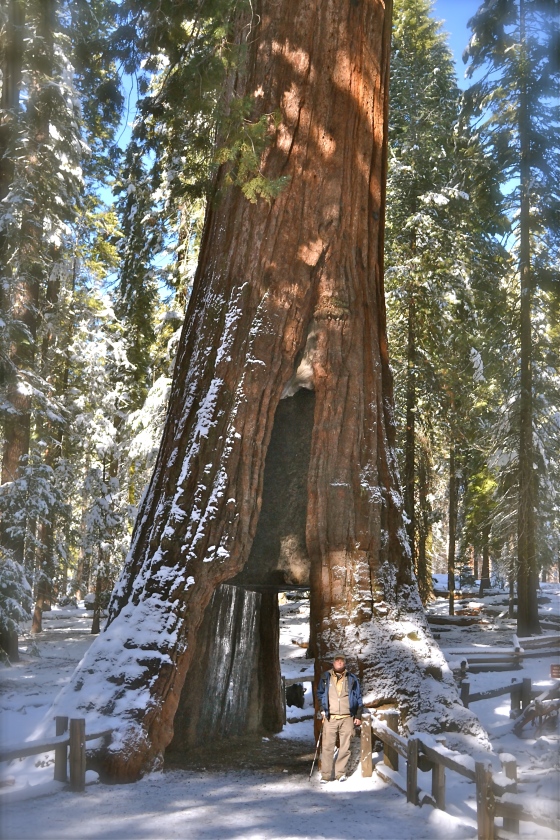 You thought I was finished composing a sonnet for these centurions, didn’t you? You obviously don’t know me well enough yet. Just look at this photo. Early settlers cut a car-sized hole right through the tree to increase tourism to the area, yet the bark has wrapped itself around into the interior. It’s healing itself and still alive nearly a hundred years later.

Eventually, we strapped on some tire chains and rolled noisily into the Valley.

Nearly an hour into Yosemite Valley from Mariposa you will enter Tunnel View. If it’s your first time visiting Yosemite and you’re traveling from Fresno you will be rewarded with the ultimate unveiling of the most iconic mountainscape in America.

Be forewarned: if you’re traveling to Yosemite between November and April, come with chains or be prepared to purchase some in the park. If you’re especially lucky, you’ll be traveling with your brilliant father who will put them on in a jiffy.

The first turn off after Tunnel View is Bridalveil Falls. Watching the water fall off the cliff and scatter into vapor and snow on its way down is not to be missed, but beware of the ice! 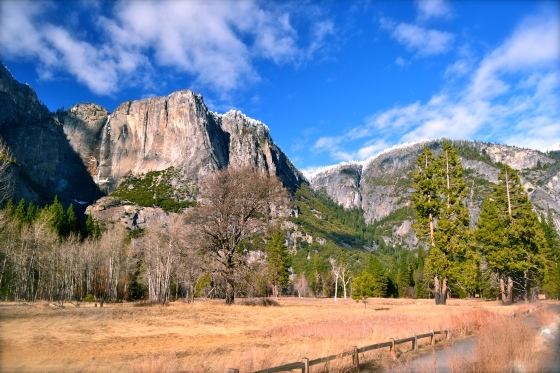 We checked into our tent cabin in Curry Village so that we could do a bit more exploring before dark. In the winter months, they run a deal so that you only pay a flat fee of about $40 for a heated cabin, plus $1 for every degree above freezing. If you stay in an unheated cabin and it’s below freezing, you don’t pay anything. I know – it sounds nuts, but staying in an unheated cabin in the mountains in January is even crazier, so I imagine they still come out ahead. 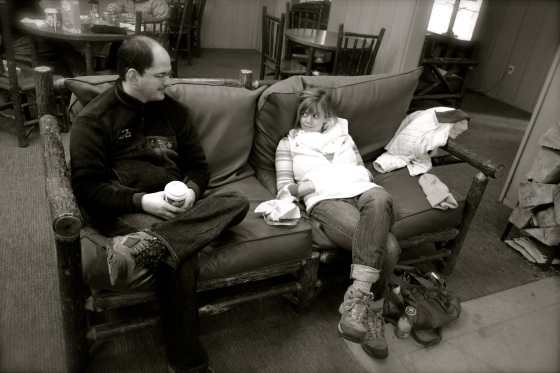 Road weary and a bit photo-fatiqued, I settled into the lodge at Curry Village across from a welcoming fire. Next time, we’ll bring a few more board games and plenty more groceries. As it was, we settled for some pizza from the place across the way.

We flipped on the heat before spending several hours in the lodge, so it was more than cozy when we got in. Naturally, I had to make a midnight trip to the loo and it wasn’t terribly frightening to do so (especially since I commandeered an escort (love you, baby!) 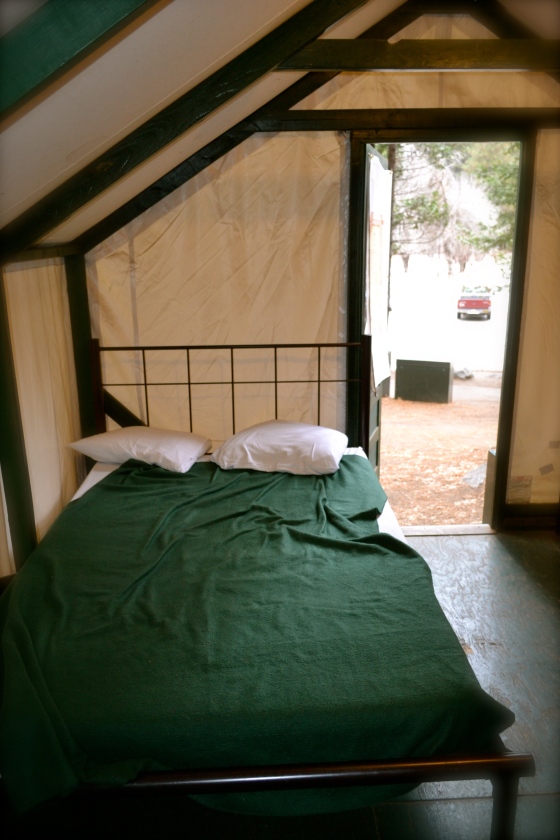 The next day we closed our eyes and chose a hike from the park map. There’s no way to go wrong in Yosemite, but to be safe in the winter it’s best to consult someone who works at the park. Some trails were closed for the winter. We took the Upper Yosemite Falls Trail to Columbia Rock.

The thing about CA hikes in comparison to the rest of the world is that the metrics are surely off. One mile always feels like two and a moderate hike always feels strenuous. To me, anyway. Strenuous, but completely worth it. 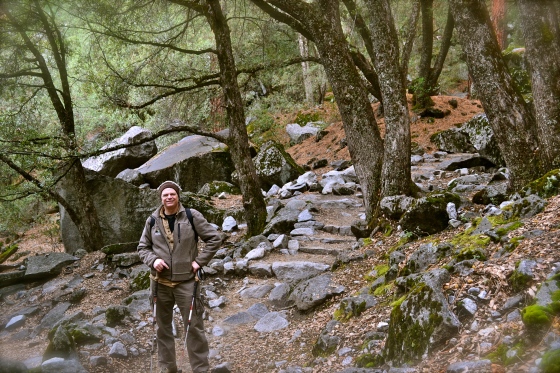 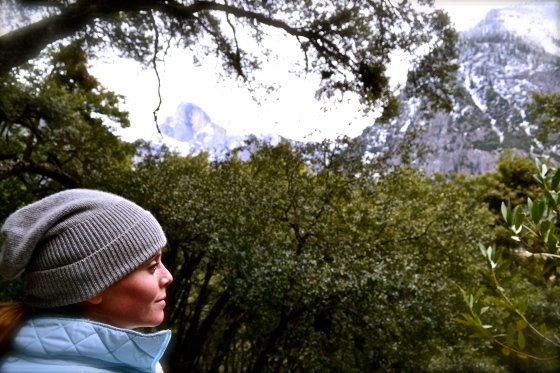 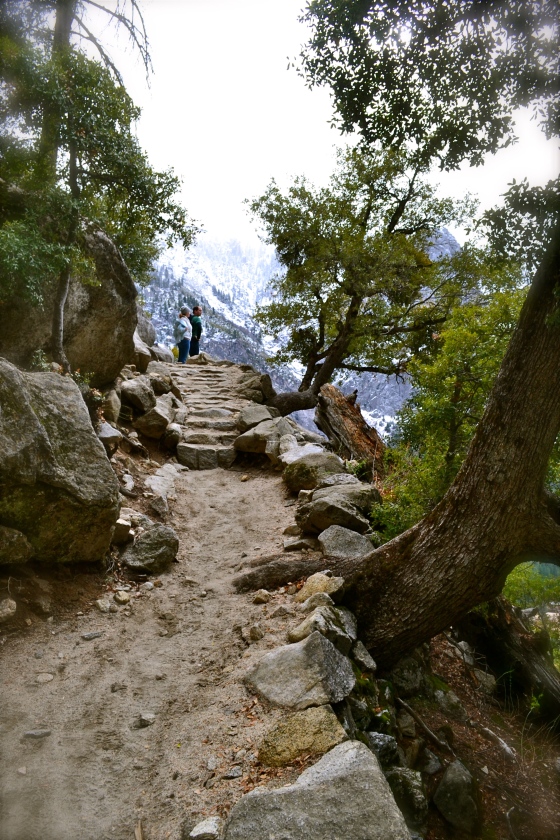 It began to snow once we reached the vista. The flakes descended in a cloud. We were warm from the hike and remained perched on Columbia Rock amidst our very own snow globe for nearly a half hour, but not nearly long enough. Slowly, we stepped down again into the Valley, into reality.

Many thanks to my dad for nearly all of these marvelous shots, and for the wonderful weekend. Come back soon. xo, Adrie 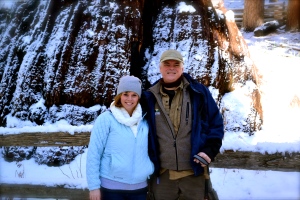